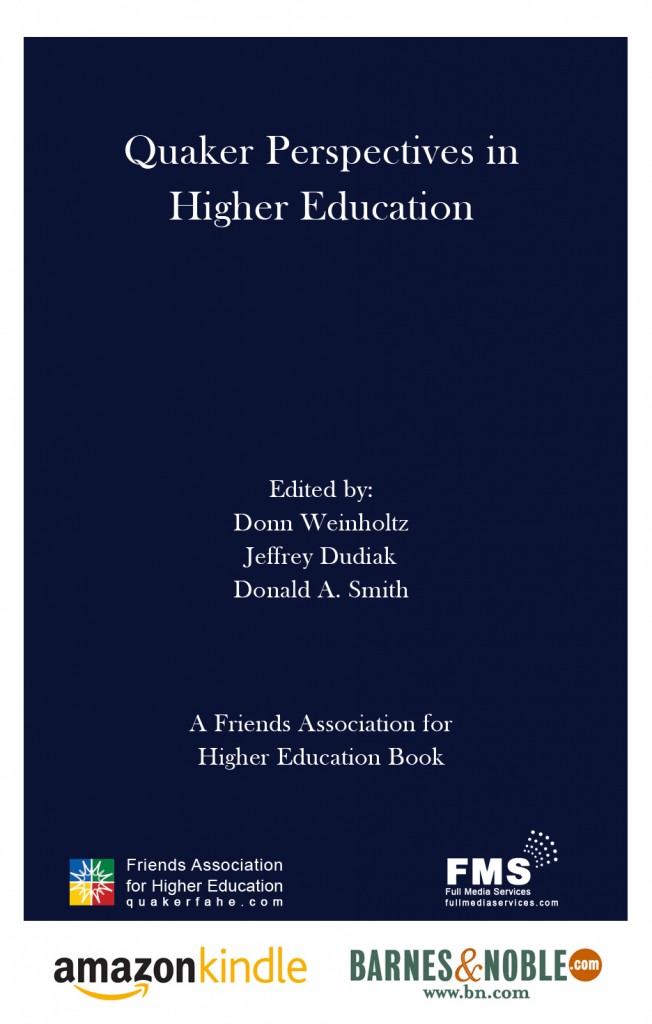 You can purchase “Quaker Perspectives in Higher Education” at the following location:

Full Media Services is proud to announce the release of “Quaker Perspectives in Higher Education”, a publication in partnership with Friends Association for Higher Education.

Quaker Perspectives in Higher Education is composed of articles drawn from the first fourteen issues of Quaker Higher Education (QHE), FAHE’s biannual, scholarly journal, which the association launched in 2007. Initiated as a vehicle for promoting communication among Quaker scholars, QHE has become a popular venue for sharing many of the finest papers and write-ups of presentations from the annual FAHE conference, products that previously too often disappeared following each conference’s conclusion. It also solicits articles addressing a wide variety of topics and issues of interest to Friends. QHE is published in April and November of each year.

This book is the first in a planned series sponsored by Friends Association for Higher Education. Each volume in the series will focus on Quaker contributions to a specific academic discipline, such as history or economics, or to a broader academic area, such as the humanities or sciences. There will also be occasional volumes addressing Quaker academicians’ contributions to important concerns such as peacemaking, commerce and environmental stewardship. While numerous texts and journals have explored the lives and works of Friends who are academicians – for example Rufus Jones, Howard and Anna Brinton, Kenneth and Elise Boulding and many others – collective Quaker contributions within the various academic disciplines have been largely ignored. This series will address that gap.

Royalties from Quaker Perspectives in Higher Education, and all other books in the Friends Association for Higher Education series, will accrue to FAHE to support the association’s ongoing publishing efforts.